USFDA supports generics made in India

The Indian drug makers are finally seeing a recovery with most of their factories being cleared by the US watchdog.

Mumbai: Indian drug companies have got a shot in the arm with the US Food and Drug Administration (USFDA) chief coming out in support of generics manufactured in India and the US to dispel fears over such medicines.

Generics account for 90% of the US drug market — up from 33% three decades ago. FDA commissioner Scott Gottlieb’s statement boosted the S&P BSE Healthcare index, which gained 0.7% on Monday.

For Indian drug makers, whose major part of business comes from the sale of generics in the US, Gottlieb’s statement has given a respite from the poor perception of generics as well as Indian-made drugs.

“Generic drugs are just as safe and effective as their branded drug counterparts… Generic medicines use the same active ingredients as brand-name medicines and work the same way, so they have the same risks and benefits,” Gottlieb wrote in a newsletter. 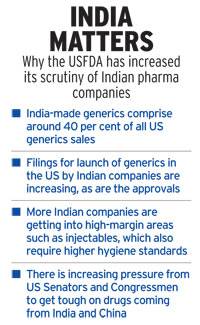 The FDA chief said the regulator’s rigorous standards and inspections apply equally to both generic and branded drugs — whether the medicines are being manufactured in Shandong, India, or in Indiana, USA.

In FY2017-18, the FDA tested 323 products from around the world — including more than 100 from India – to determine if foreign manufacturers had a higher incidence of product failure. All 323 samples met the US market quality standards using testing standards set by the United States Pharmacopeia (USP) or submitted in marketing applications, the regulator said. Though the inspections by the USFDA declined slightly in China from 2017-18, inspections in India have increased substantially, according to Gottlieb.

The Indian drug makers, hit by regulatory action on their manufacturing factories, are finally seeing a recovery with most of their factories being cleared by the US watchdog.
Read more at:
//economictimes.indiatimes.com/articleshow/68161844.cms?utm_source=contentofinterest&utm_medium=text&utm_campaign=cppst