Using a combination of two well-known medications from the bone marrow of the experimental mice, stem cells were lured.

Medical scientists have proposed a new method for increasing the number of blood stem cells by expelling them from the red bone marrow with two drugs.

Both of them are currently widely used in medicine; the first one is AMD3100, which prevents the cells from returning to the bone marrow, and the second is sildenafil, which is the main active ingredient in all drugs for the treatment of erectile dysfunction.

Researchers have already tested this combination on laboratory mice. With its help, it is possible to get not much less cells than standard methods, and side effects from this procedure should be much milder. 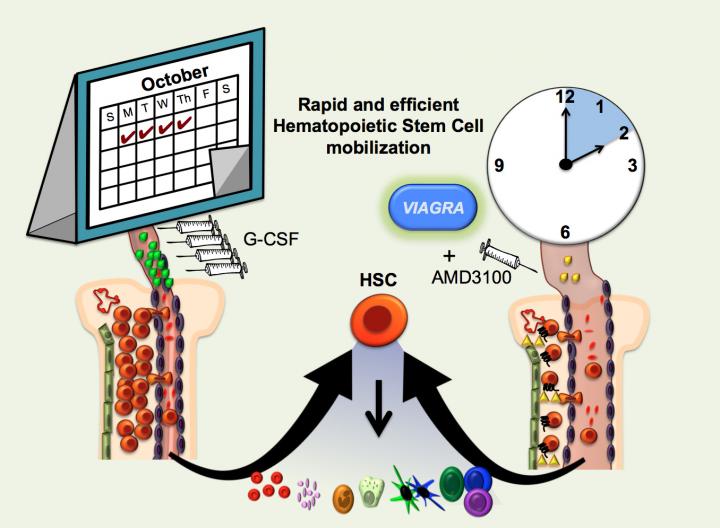 Viagra, best known as a treatment for erectile dysfunction, is a safe and well-studied drug that promotes the widening of blood vessels (vasodilation), which increases blood flow to tissues. Initially developed as a treatment for high blood pressure, it is now used to treat a variety of vascular disorders, including pulmonary hypertension, altitude sickness, and preeclampsia.

Forsberg’s lab decided to test Viagra’s ability to help mobilize hematopoietic stem cells from the bone marrow after observing that vascular changes in a strain of mice they were studying led to increased stem cell mobilization. The mice lack the gene for a cell surface protein, Robo4, which the lab’s previous research had shown regulates blood vessel integrity to keep the stem cells in the bone marrow.

Plerixafor, the other drug in the combination, is an inhibitor of Cxcr4, which is a receptor on the surface of hematopoietic stem cells that helps them stick to their niche in the bone marrow. Plerixafor mobilizes the stem cells, but is not very effective on its own.

“When you dilate the blood vessels with Viagra, the cells mobilized by Plerixafor are better able to get out into the blood stream,” Smith-Berdan said.

Viagra by itself did not lead to detectable increases in hematopoietic stem cells in the blood, so patients using it for other reasons need not worry about inadvertent stem cell mobilization, the authors noted.